“Some believe it is only great power that can hold evil in check. But that is not what I have found. I’ve found it is the small things, everyday deeds of ordinary folk that keeps the darkness at bay. Simple acts of kindness and love.'” – Gandalf

Dear Circle,
I am just back from another intensive round of services offered to Syrian refugees in Jordan. The Social Health Care Program (SHC) for Syrian Refugee Children and Families, which I co-developed, worked with dozens of widowed mothers and their children to reduce the effects of displacement, loss, and traumatic exposure to war/violence in Syria and the surrounding area. We launched a specialized women’s support group for the mothers, and through the aid of colleagues and volunteers on the ground, will be able to continue these group services. The groups allow the mothers to get support, learn stress management skills, and tools to help their children manage their own traumatization. As I have shared in previous postings about the refugee situation, the majority are children who have been exposed to a wide range of war, violence, and loss.

We worked with dozens of traumatized young children. The picture here is of a little boy name Shadhi who I first observed completely shut down and not moving in the arms of his mother. The picture here shows how frozen in fear he was and how he looked after healing work. We saw many of the children move from fear and reactivity to joyfullness and smiles.

We were blessed to have Nimo Patel, a wonderful musician (emptyhandsmusic.com) who lives at the Mahatma Gandhi Ashram in India. He brought with him necklaces made by Indian Street children (words in Arabic and English) for the Syrian refugee children. Concerts with Nimo were put on for refugee families in Irbid and Amman, Jordan.

One of the things the children loved was to perform with Nimo in signing the chorus from the song, Planting Seeds. It starts:

I spent a long time runnin’
I never knew then, what I know now,
That the fruits they always comin’
But you can’t go around just knocking them down
It takes a long time to showin’
We plant the seeds then, and we look at them now,
But the roots are always growin’ 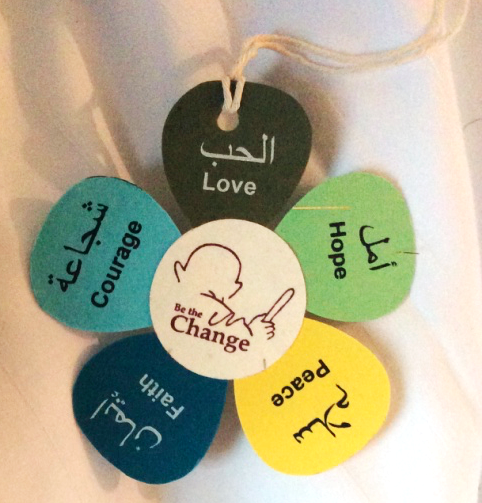 No matter if I’m there or never around”

Whatever grows will grow
Whatever dies will die
Whatever works will work
Whatever flies will fly,
Whatever fails will fail
What’s meant to soar will soar,
I am planting seeds nothing more.

As I write these words, I can see the joy in their faces as they would sing the chorus of the song. It reminds me of one of the guiding stories of my life, Johnny Appleseed, the man who planted trees everywhere. Its how I’ve seen a lot of the work I’ve been able to do through the decades, it’s all about planting seeds of hope, possibility, healing, and love.

I contrast this to the rhetoric demonizing Syrian refugees as potential terrorists. These seeds are a form of mean-spiritedness and projected violence onto refugees, the vast majority of whom are children and widowed mothers. They have witnessed violence in its many forms and its aftermath of displacement, loss, hopelessness, and grief. To quote from a poem about the refugee experience by Warsan Shire, a Somali poet, “no one leaves home unless, home is the mouth of the shark”. The rhetoric is a war spirit. To Indigenous people, war is seen as a spirit that eats at our souls and hate is its ally. Left festering instead of extracted, hate is a cancer that eats at our hearts and souls until all that is left is fear, bitterness, reactivity, vengeance, and profound emptiness. There is a larger dialogue we could all be having about how to come together in creating safe harbor for all of us and in opposing those who cloak their violence in righteousness. Advocating violence as the only alternative, only serves to condemn generations here and abroad with more traumatization to be healed.

Our times call for love in action, to embody our prayers into living action. Peace and healing can only come through love in action. I have loved all the actions of people in Europe who responded to the needs of the mass refugee migration before the governments did anything. They were there will food, clothing, blankets, smiles, and warm embraces. Even more came out to help as they were embarassed by the hostile actions their governments took. The people were there before the governments began to act. This does not minimize the complexity of the situation and how to house/integrate this mass influx. It simply says we embrace as sacred opportunity the situation presents all of us to be the better people we seek to be.

I am reminded of my first invitation to work with Black street gangs in the early 1990’s. The invitation was from Americorps which was putting together moral education programs led by spiritual leaders of all faiths. At the time in Denver, there was a shooting death a week occurring. The staff told me they could probably pull together 7-8 kids and about 10 staff for my program. We had around 50 show up which was a story unto itself. What struck me was how much they wanted to tell me their ghost stories and from there they could share their pain. We could cry together. I was up into the late hours of morning listening to their stories and the common phrase “our problems are so great, only God can solve them.” I talked with each one of them about how they were the healers their community needed and how acts of kindness could be the medicine for God’s magic to come through. The shootings did begin to slow down and I heard later stories of different gang members doing acts of kindness for the elderly and others in the neighborhood.

“How will you serve the world? What do they need that your talent can provide? That’s all you have to figure out. . . . That piece that we’re after, lies somewhere beyond personality, beyond the perception of others… even beyond effort itself. You can join the game, fight the wars, play with form all you want, but to find real peace you have to let the armour go. Your need for acceptance can make you invisible in this world.” – Jim Carrey

In the last week, I heard the tail end of a talk with an author who mentioned that “compassion” is not a feeling, but if it were a feeling it would be discomfort. I’ve thought about that a lot. I know in trips to work with the refugees and to teach in the Arab world, there is always an element of discomfort I feel. My human experience there is always energizing, inspiring, and warmhearted. Yet I do know its important that we embrace that discomfort and enter spaces that we would normally avoid for healing relationship to occur. I think that is what I mean by love in action. We transcend our discomfort to connect deeply with others for our common good. When I think of students of mine that ongoingly talk with members of the Tea Party movement, I think that’s compassion. And they share, that both sides of the political continuum share the same concerns, though different ideas about how to address them.

I think of my father who was a man of few words. We were dirt poor and often it wasn’t clear if we would have enough food for the day. My father would always find people who had even less than we had and bring them home to dinner. No matter how down their lives had gone, they were treated with dignity and respect at our dinner table. And as I would learn years later, he would help them find work and get on their feet. That kind of loving act is so what is needed now in these times.

Bottom line is most people want peace, to feel safe, to be able to express their gifts freely. It’s time like what occurred in Europe, for the people to lead so the government responds in a positive fashion. Let us be the open arms welcoming all who are in need… each of us can in our small ways be a statue of liberty: “give us your tired, your poor, your huddled masses yearning to be free.” Together we can redream the world anew. A world with heart, compassion, peace and love.

May your holiday season be blessed,

Demand for the training and services offered by SHC has grown throughout the region. The needs for psychosocial support and trauma treatment for the millions of refugees are immense and many have praised the SHC model for its efforts to build capacity from the grassroots up and the high quality of trainers in trauma informed care from the international community. We are now at a juncture where expanded funding will allow us to expand services to people most in need and help expand the pool of trained personnel on the ground. Please give what you can to our current Global Giving Campaign.