“In every community, there is work to be done,
In every nation, there are wounds to heal,
In every heart, there is the power to do it.”
– Marianne Williamson

“Fear is the cheapest room in the house,
I would like to see you living in better conditions”
– Khwajeh Shams Al-Din Muhammad Hafez-E Shirazi, 14th C. mystic

In a sprawling new interview in The New Yorker, President Obama shared with David Remnick what he told his own daughters, Sasha and Malia, in the aftermath of Trump’s win:

“What I say to them is that people are complicated,” Obama told me. “Societies and cultures are really complicated … This is not mathematics; this is biology and chemistry. These are living organisms, and it’s messy. And your job as a citizen and as a decent human being is to constantly affirm and lift up and fight for treating people with kindness and respect and understanding. And you should anticipate that at any given moment there’s going to be flare-ups of bigotry that you may have to confront, or may be inside you and you have to vanquish. And it doesn’t stop … You don’t get into a fetal position about it. You don’t start worrying about apocalypse. You say, O.K., where are the places where aI can push to keep it moving forward.”

I’m sharing President Obama’s quote as a lot of people contacted me in the days post our recent presidential election. Most are expressing bewilderment about how this could have happened; shock at the degree of hate we are witnessing; and how much anxiety/fear they are personally experiencing. I agree with his remarks and the wisdom in them.

This last year I’ve been doing a lot of research on the issue of communal trauma and what kinds of methodologies are needed to address historic issues we carry collectively. We have a tremendous amount of history that has never been healed in this country (slavery and the genocidal assault on Native people as examples) and around the world. Most of the research on trauma focuses on its effects on individuals. The indigenous/shamanic view focuses more on its communal impact and personally, I think we need to look at what is happening now in the U.S. (and Europe too) in this way.

Fear is driving the hatred and divisiveness. Fear based communities share a belief that “we are right” and “they are wrong” , and they work together to realize that belief.  And in that belief, people listen to stories not based in fact or truth, but rather those stories that feed their beliefs. People join with others against perceived threats in their stories. In the belief system of fear based communities, “we will do whatever it takes for our tribe/our people, to win and defeat the other.”

I know personally all too well what it means to be on the receiving end of hatred. Through the years, I had many opportunities to do healing circles with men who belonged to the KKK or neo-Nazi groups. Underneath all their hate was  personal trauma, pain and fear, and the expression of their hatred merely an attempt to get rid of their pain by giving it to another. To oppose hate in my own view is one step in the healing process leading us to a more civil and peaceful world. Only one step in a long journey as we have to find ways to acknowledge the undercurrents that feed hate and find ways to heal our collective wounds.

People fight each other because they have anger, fear, and craving inside themselves. They want more wealth and resources than they have, and believe they can get more of what they want by hurting others. Fear and anger are born from misunderstanding. If we want to make more peace in the world, we can start by taking care of the misunderstanding in ourselves. – Thich Nhat Hanh

Naturally, its easier to preach to the choir of those circles of people who may share similar views as our own. These times call for dialogue with whomever is our “Other” as a means of opening doors between us and finding the stories that unite us. We need to know one another by spending repeated time together and sharing our stories. Our task to slow down so we can listen before we respond and hold firm in our hearts. We need mutual acts of caring to build a sense of belonging. We know and act when neighbors and friends and family are sick. Mutual acts of caring and trust can be built in these times. If we hold that all life is interconnected, we must as a spiritually radical act refuse to be separate. To refuse separation is to embrace an “absence of they or them”. In celebrating and caring for each other, our caring for each other deepens.

If we are to survive these times, we will need the story tellers to help us remember where we have been and where we do not wish to go again. Those lessons of how we transcended dark moments in the past  can be the stories that give us hope.  Years ago, I had a spiritual message that went “spirit without action is malaise, action without spirit is oppression.” Its been a guiding mantra and reminder to seek the guidance of the spirits in our actions and the importance of living that guidance in our lives in an active way.

In this time of polarization, reactivity, and hate, we are called to actively engage the world. The luxury of choosing to distance ourselves or to be silent by saying “we are neutral, praying, sending love and light, or trying to keep our vibration high” is too passive when direct loving action is needed. When anyone is diminished, we are all diminished in some way. When we demonize someone because of who they voted for, we have to be able to see how that perpetuates the polarization and anxiety in our world. To say we stand against racism, antisemitism, Islamaphobia, misogyny, it means little unless our actions are congruent with our words.

Through all these years, its seemed to me that circles of support teach us a lot about living life with wisdom. We need each other and often can’t heal without community. In times like this in our world where we are facing intense issues, we need to widen the circle and widen the circle more. Widening our circle of our love (as Ghandi would remind us)is key to walking in a healing way. We must widen the circle of our love til it embraces the whole village. Respond to entrenched disagreement by eating meals together with those we disagree. Such eating together is a sacred act. Tribal people have long known that conflicts are best resolved when people share food, stand next to each other in dance or ceremony.

Drawing upon 50 *years of political and spiritual activism, the training shares psycho-spiritual tools that have been helpful for personal empowerment, building coalitions and group energy, conflict transformation, and strategic planning. Our times are calling for new models of healing our shared histories of communal trauma and creating a pathway of service to the common good. The intent is to creative a safe container for people to get support and encouragement to engage in spiritual activism at this time in the world. We’ll take time for dialogue, sharing, learning, and dreaming with the help of the spirits. The goal is to create an ongoing space where people can meet for support and problem solving as they work to bring healing and conflict transformation in their communities. Ideally we’ll  create a circle that can meet occasionally and an online forum for sharing concerns/ideas.

Fee for the day will be $125. Scholarships will be available based on need as the intent is to be inclusive of all people. If interested, contact me at meshowsky49@gmail.com

*(I began my journey with the civil rights movement. Started my first NGO at age 19 around migrant labor organizing and protection of workers against abuse. Through the years been involved in antiwar work, prison rights , consumer rights for patients with mental illness, anti poverty/community organizing, violence prevention and conflict resolution with gangs, union organizing, humanitarian refugee work, and numerous peace/healing projects.)

If there is interest in other areas and if my schedule allows, I could bring this training to other communities.

The book Why Global Health Matters, ed. by Chris Stout is being released early next year. I co-authored a chapter on the refugee work we’ve been doing with the Syrian refugee community in Jordan.

Recently, we were in Jordan and Germany to work with refugees and continue our program of training grassroots people in trauma informed treatment. This year we were able to provide

training in Internal Family Systems work, Yoga therapy for trauma, and Expressive arts in treatment of trauma. Additionally, we held the annual International Conference on Transgenerational Trauma in Amman and a new international conference on the refugee crisis in Europe and the Middle East in Freiburg, Germany.

We ran four days of clinics in Amman. During that time, I primarily did healing work with young boys (8-10 years old) who were having problems with suicidal thoughts/actions, chronic bedwetting, and explosive anger. One of the suicidal boys had witnessed his home being bombed when he was 5 years old and many family members were injured. He later saw his father die in Jordan from injuries that had occurred. His daily nightmares and his thoughts led him to want to reunite with his father in “paradise”. Post our initial healing work, his nightmares had stopped. We met each day and one of the days, we kept being interrupted by a small group of boys fighting and choking each other to the point of serious harm. Several attempts were made to stop the fighting but it kept flowing into our room. In a beautiful moment, I got the boys to agree to do what I called a Native American prayer ceremony. Watch the video here. They calmed down immediately and the fighting completely stopped.

In Germany, the staff at one of the refugee camps asked for my help in working with young male African refugees. Many of them had been captured by Arab slave traders and forced into slave labor in northern Africa. During the rise of the Arab Spring, they managed to escape to Europe. When we were at the camps in the summer, I was well aware of the anger/hardness the men expressed. The staff felt hopeless in how to deal with the conflicts which arose with these young men and Syrian refugees as well with the staff. I met with a circle of the men to teach stress management, hold a sharing circle, and to do a healing ceremony. It was personally an honor to witness the transformation that occurred and staff who attended were moved to tears. If possible, I hope to return.

Banner is from German refugee camp. 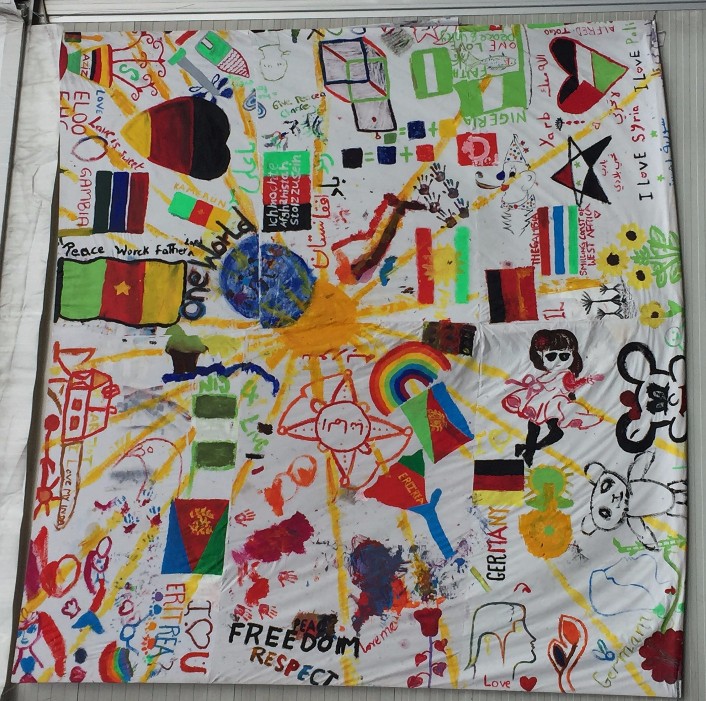